My Experience of painting number 6 "Murder"

The task at hand is to articulate the exhilaration of creating the second painting in our series. And before I begin, I must say, the depths of the human soul, no matter how morbid, is a remarkable place to explore.
I arrived at Allen’s home around 2:00 pm. The weather was weighted with humidity, but my mind was much heavier. The entire morning, before my arriving at Allen’s, was spent writing about the sexual abuse from my childhood. This was the first time I have ever done such a thing and if were not for this project, I would have never broached it.
Allen and I exchanged pleasantries and I took a seat. I pulled out my laptop and began transferring my sexual abuse piece from notebook to word document. Allen’s son, Walter, came downstairs and asked his father: Can we go to the park? Allen being the father he is, took his son. He could see I was writing and was keen on the tumultuous nature of it and allowed me to stay at his place and finish my work. I finished transferring the piece from my notebook in about half an hour and by this time, Allen and Walter returned home.
I asked Allen to read my piece in an emotional daze. I tried removing myself from this pensive state of self-absorption. Around the time Allen finished reading my piece, I was back here. He told me the piece was well written and he was proud of me. As a writer, hearing the words “well written” or “nicely written”, depending on your current state of mind, ooze from a readers mouth like welcomed silk. But, when dealing with such ugly subject matter, crafting something of aesthetic value is less of a concern. This is an ongoing conversation between Allen and I, which I will elaborate on some other time.
Allen’s wife, Dawn, arrived home shortly after this, to watch Walter, while we went into Allen’s studio to paint. Allen had already prepared the canvas earlier in the day. The studio was a bit in shambles from the previous session when the rain flooded it. We began shifting various items around to provide us with a more comfortable work space. I picked up a can of red paint, and much to my surprise, it splattered all over the floor and my shoes. Now, in all likelihood, this was my mistake. But a modicum of me believes spilling this paint was either a wonderful coincidence or an act of divine providence. Either way, me spilling the paint only added to the already boiling levity of the experience, of the art.
Allen laughed it off and began using the paint to color some of his painted jackets. I thought nothing of it, at first, but Allen had different ideas altogether. After this, Allen started rolling the camera and provided a monologue, and once again, I fell enamored. After our last experience in this space, and the overwhelming emotion invoked by it, I was expecting much the same, if not a more nuanced outlook on some of Allen’s childhood terrors. We took a deep, collective breath and Allen began painting and narrating with clairvoyant intricacy.
He started, with brush in hand, picking spots on the canvas. This piece had less to do with sexual abuse and more to do with the visceral and cunning nature of one of Allen’s abusers. He began with heavy strokes and a heavy heart. He was painting with such an intelligent fury. I was taken aback by his courage. He arranged those involved in this memory on the canvas, by strong brush, and with vivid color. My breathing grew heavy. I felt as though i was Allen as a little boy in this horrible place.
Allen continued channeling through paint and brush, maneuvering through his memory. The darkness of the experience became more magnified. While Allen continued painting, I caught a glimpse of his feet through his sandals. He has scars on them from a surgery he had as a child. He once told me about them, and how terrible the pain was. I fell into a moment of profundity as Allen continued on the canvas. I saw him progressing through the stages of his life. I felt his spirit growing with strength. From that young boy who was tortured and victimized by the most grotesque of people, into the man, the father, the husband, the friend he is today. A man of character.
A moment came, in which I though Allen had finished painting, but, he had other ideas. Allen took control of the space, the painting, and himself. Mr. Morgan, Allen’s most prolific abuser, took Allen’s left hand and put it in a pool of blood, when Allen was child, and told Allen’s childhood self – “This blood is on your hands”. This is when my perception of this experience took a powerful turn. Either consciously or sub-consciously, Allen was aware at how damaging that particular moment with Mr. Morgan had been, and put his hand in the red paint I spilled earlier and left his hand print on the painting. I watched the boy who was so brutally tortured, declare to himself, and the world, he has taken back his power.

Than in frantic and creative pace, he put his left hand in the remaining pant and began moving through the canvas. By this point Allen was no longer speaking, but, we could hear each other’s thoughts or at least feel each other’s presence. Allen’s breathing intensified, and he began attacking the shape of Mr. Morgan with his left hand, with an indomitable conviction. After the paint had finished, Allen through down his supplies and stormed out of the room. I could feel the emotional anguish the painting caused him. We had a brief conversation afterwards, an Allen looked ill again. As if he was coming down with the flu. Allen pulled courage from his well of inspiration, and in kind, borrowed me some of his plentiful resource. I remember, very vividly, Allen saying “No child should ever have to experience this.” 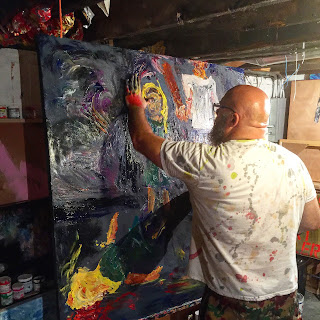 Posted by Derek Hopkins at 1:32 PM