I am writing this on August 25th, 2016. It is nearing 10:00 am and I find myself at a desk. I cannot help but to feel as though the layers of my ego are being peeled away from the nature of this project, leaving me here, with no claim, naked, waiting for the divine to illuminate my path. Leaving my inner most thoughts on the page is a confused gesture, which I pray, in a non-conforming way, will provide you with the emotional toll this project has taken, and will continue to take, on Allen and myself. The closer we come to completion, the more daunting, overwhelming, and scary, the reality of it all becomes, from my point of view.

We finished the third painting several days ago. I have only just summoned the wherewithal to write about. I arrived at Allen’s early in the morning. I met two of his interns, both splendid people, and we went to have brunch. We shared a meal and intellectual conversation. I posited my disposition, during this conversation, of art and the purpose it should serve in civic and political society, the substance of which I do not want to share at this time. Allen offered his own wisdom. After arriving back at Allen’s house, I began writing the first draft of the second painting while Allen worked with Fayre, his intern, to prepare the canvas that would be used later in the day.

Writing this first draft was such a difficult task. To write a story, fiction or otherwise, is to put myself inside the headspace of another, and explore their realms of understanding and the respective nature of experiences that coincide, and relinquish all, back on the page. A day will come, when you will understand the true nature of what Allen has lived through, and perhaps, myself. I finished this draft in a cloud of delirium. I had to take a nap. During this time, Allen continued showing his intern the artistic ropes.

Allen rolled the cameras and we were off. There was a bizarre calmness in the space for this session. The subject matter was horrid, but, in comparison to others, it was rather lighthearted, which is a rather damning thing to say. Allen, with his passionate flare and thoughtful strokes, began painting and narrating. I expected him to make quick work of this painting, due in part, to a personal breakthrough he had achieved hours before, from a heartfelt and retrospective conversation we had. Allen gained a corollary view into the relationship he had with Mary, the daughter of Mr. and Mrs. Morgan, and through this, Allen discerned what impact this had on his emotional development and intimate relations.

The canvas continued taking shape, with such vivid and bright colors. After careful strokes and intelligent color which culminated into several fleeting moments of immense intensity, we took a brief intermission to switch recording devices. During this time, I took note of Cheryl’s expression, who was sitting to my left, and Fayre, who was sitting to my right. I would describe their faces as dumbfounded with curiosity or interest. Their presence in the space added a calm and balance, I suppose.

The cameras started rolling once more as Allen mustered what he had left and dipped back into the past. There are two things that must be mentioned that proceeded our intermission. The first is Allen unearthing a truth that had been lost in time and memory; the incident that provoked Allen’s furious bewilderment while cutting the wood and his envisioning the wood he was chopping as Mr. Morgan’s head. Moments before the subject matter of this painting took place, in which Allen was 12 or 13, and the abuse from the Morgan’s had subsided, his father had tasked him to chop wood. When Allen went to do so, he saw the kids of the neighborhood, including the Morgan girls. They began making fun of Allen and jested the size of his penis. Allen asked how they could possibly know such a thing. The Morgan girls responded by saying they had pictures of it. This is what caused Allen’s confusion and precipitated him to chop to wood while in a fantasy of killing Mr. Morgan, all in confusion. Allen worked through this revelation aloud while painting.

The second the event worth mentioning occurred moments after the first. Allen picked up an axe he had in his basement without warning. I said to myself “Is he about to chop the painting?”. I was astounded, when Allen, began painting with the axe. Painting axes with an axe. It painfully clever. The axe is representative of certain aspect of Allen’s artistic character, something I believe he can elaborate on more. Even more so was Allen’s inclination for precise intro and retrospection into the times of abuse and it’s causation on his mental state today. This is the way of the artist, in my eyes; rendition, through a chosen medium, the world around and how it is braided with the world within, and from the cyclical symbiosis, the artist, in the thick of their learned and paradoxical endeavors, ebbs and flows, from their self to the world and back, manifesting what they so choose, until the flame within, burns out. 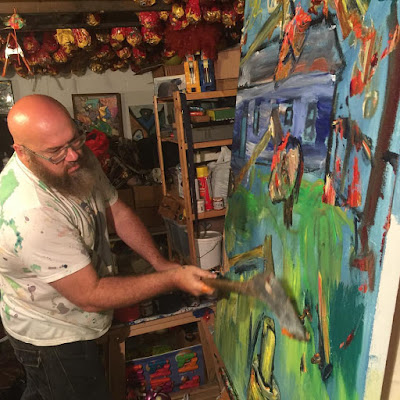